Graham has lived in Beaconsfield for over 30 years with his wife and 3 children. He was a Chartered Accountant in practice for forty years and his office was situated in the Old Town. Living and working locally he is in a good position to meet and hear the concerns of people living in Beaconsfield. Graham is concerned about the growth of inappropriate development in the New Town and will fight to protect it’s character. As an accountant he will endeavour to deliver value for money services to the residents of the Town .

Graham Corney served as Town Mayor 2012-2013. “Having lived in the area and worked in the town I feel that I am very well placed to understand at first hand the concerns of the residents and want to do what I can to make life easier and more enjoyable for us all.” 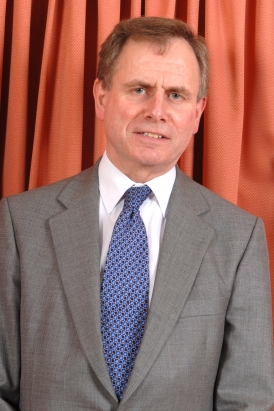 It has been an honour and a privilege to be elected Mayor of Beaconsfield particularly as it has coincided with the Diamond Jubilee celebrations and the Olympics. I probably have attended in excess of 130 events during my year of office and had the good fortune to meet on many occasions the Lord and deputy Lieutenants of Buckinghamshire and the High Sheriff. I have also had the privilege of being introduced to the Duke of Edinburgh and the Duke of Gloucester and attended the Queen’s Diamond Jubilee Garden Party on the 25th July .

I have, in addition, met very many Mayors, Council Chairmen, Church leaders and senior representatives of our armed forces. There have been so many memorable events that will stay with me for a long time, but the ones that stick in my memory were:- Participated in the Diamond Jubilee Pageant on the Thames as hosts to a Deputy Lord Lieutenant , the Mayor and Consort of Milton Keynes and senior members of Bucks County Council. The atmosphere was electric and seeing so many people lining the embankments and bridges was amazing.

Lighting the Beacon as part of the Diamond Jubilee celebrations at Beaconsfield Rugby Club.

I travelled to our twin Town Langres to meet  Mayor Didier Loiseau to celebrate Bastille day and met many members of the community in Langres.

Attended a presentation at the Oculus Aylesbury where our town crier Dick Smith and Anne Tennant received their British Empire Medals from the Lord Lieutenant.

Attend a dinner at the Old Bengal and met Sophie Christianson 3 times Paralympic Gold Medal winner who allowed all the guests to handle and be filmed with her medals.

Mayor of Langres and a number of his colleagues came to Beaconsfield and attended the lighting of the bonfire and the firework display at the Cricket Club followed by a Jubilee Dinner at the Fitzwilliam Centre hosted by Beaconsfield Twining Association and also attended by Dominic Grieve MP Attorney General. Attending the Remembrance Day Service including laying a wreath on behalf of the Town Council and reading a lesson during the service of remembrance and afterwards going to Wilton Park for lunch. Met the Duke of Gloucester on his visit to Beaconsfield and Bekonscot Model Village

Attended the Festival of Lights and the Carol Service afterwards. Attended a lunch at Woodrow High House for a celebration of the refurbishment of the house and was introduced to the Duke of Edinburgh.

This experience has shown me what an extraordinary amount of good work is carried out in the community very often unseen and without praise or payment by so many people. I would encourage anybody who would like to spend time contributing to helping our community to consider putting themselves forward for election to join Beaconsfield Town Council and make time to be considered for election to being Mayor, it is a wonderful experience .